And I have some bad news for you. The Andromeda galaxy, containing 1 trillion stars, is on a collision course with our own galaxy, the Milky Way, and is approaching at a speed of 200 miles per second.

That’s thousands of times faster than the asteroid that caused the dinosaurs to become extinct, and a thousand trillion trillion times more massive. You don’t want to be sitting around on Earth when that happens, even if you have a nuclear bunker under your cellar, like they all do in Switzerland.

In fact you probably won’t be, because the collision isn’t due for another 4 billion years. But don’t worry – I’ve found this beautiful series of illustrations of what the collision will look like for an observer on Earth. 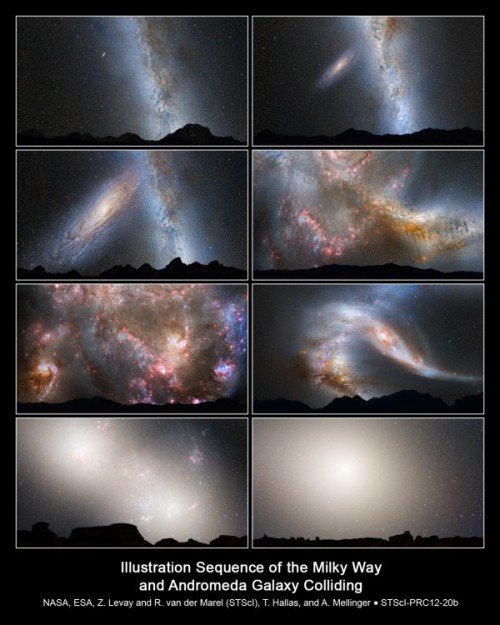 Beautiful, but a little scary too.

By the way, if anyone tells you that space travel is a waste of money, tell them about the Andromeda galaxy and the need for us to leave the Milky Way before shit happens. And tell them that the clock is already ticking.

This entry was posted in Science and tagged Prediction, Science, Technology. Bookmark the permalink.

7 responses to “A for Andromeda”