Oxford, where I live, must be one of the most beautiful cities in the world. Especially if you ignore the ugly parts. Man, they are ugly! But the beautiful parts, they are sooo pretty.

I love the names of the streets too. As a student I lived on Logic Lane. How cool is that?

In the heart of the city you’ll find the dependably-named High Street and Broad Street, running parallel east to west in an orderly fashion. To the west is Westgate; to the east is Eastgate. To the north is Northgate. There doesn’t seem to be a Southgate, but what the heck, the general idea is sound. There are plenty of reassuringly English-sounding streets ranged around the centre: Beaumont Street, Radcliffe Square, George Street. And this is where many of the university buildings stand too. Ancient beacons of learning, shining knowledge into the darkness.

All very safe and reassuring. And yet …

As you became more familiar with Oxford, it seems to grow more mysterious. Beyond the central arrangement of parallel streets you begin to notice narrow lanes joining them at odd angles. They have names like Old Greyfriars Street, Preachers Lane and Turn Again Lane. They are dim and cobbled and dangerous. Don’t go down there!

Sometimes you pass a building with a mysterious sign on it, like All Souls or Blackfriars. These places are off limits, their portals closed to the public. Sometimes strange-looking people enter or leave these places. Who knows what they are doing in there? Anything could be going on in their cloistered innards. Hurry past! Try not to look! 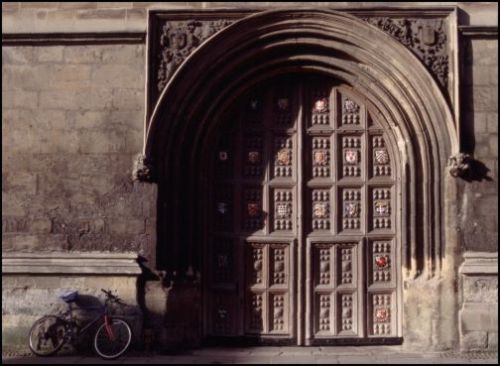 The architecture that at first seemed so solid, with its golden stone facades, has also changed. Now you see the blackened crevices between the gold; the gargoyles peeking out from under the roofs.

There are churches in every nook and cranny, sometimes even inside other buildings. There’s practically a place of worship for every soul in the city. They skulk behind creaking wooden doors and hide behind ancient oak trees. They are everywhere, like cracks in the pavement. You could trip over them if you don’t watch where you are going. And the gravestones! They pop up out of the autumn fogs: incongruously next to a sandwich bar; silently next to a busy bus stop; and most sinister of all, they jump out at you when you are traversing one of the high-walled cobbled lanes that spider the city like a twisted grid, refusing to conform to rational notions of north-south but following their own unwritten laws.

Oxford is a dangerous place for the unwary to tread. Visitors, arm yourselves! Beware of the darkness! Do not travel alone!

Watch for the monsters!

This entry was posted in Life and tagged Humour, Language, Words. Bookmark the permalink.