I don’t mean the kind of people who will follow you back if you follow them. I’m not talking about “Get 500 followers in 24 hours or your money back!” I’m not asking for any money in return for revealing the “secrets”.

I’m talking about real people who follow you because you have something interesting to say to them.

My love affair with Twitter didn’t follow a smooth path. At first I hated Twitter! Then I had an epiphany and I loved Twitter! But I still didn’t have many followers. In fact, I had approximately ten. Let’s be honest. It was five.

Being a vain, narcissistic blogger I suffered from the misconception that I should have more followers than the number of people I followed. But that strategy didn’t work. After a year on Twitter I still had almost exactly zero followers, even though I tweeted regularly. Of course, nobody ever read those tweets. What was I doing wrong? 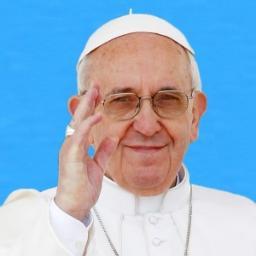 The Pope (@Pontifex) has millions of followers but only follows himself. That strategy might work for the Pope, but it won’t work for normal people. Why? Because it’s the behaviour of a psychopath!

A person who is engaged with Twitter and is genuinely interested in hearing news and views will follow many people. Barack Obama (@BarackObama) follows more than 500,000 people! He’s obviously someone who’s very much engaged with the Twitter community, even if he surely hires a team of people to manage his Twitter account on his behalf.

And guess what? Obama has 10 times more followers than Pope Francis! Obama has almost as many followers as Justin Bieber (@justinbieber), even though Justin is way more awesome.

And start tweeting. But not just self-serving tweets to your blog posts. Tweet stuff that will interest your followers and that they will be pleased to retweet to their own followers. As Barry Manilow once sang (in a parallel universe):

That doesn’t even rhyme, Barry.

But trust me, very soon you will find that your Twitter followers are growing in number by the day. Follow back the people who look interesting, but don’t be afraid not to follow if you don’t want to. Remember – the people you follow on Twitter establish your reputation just as much as the people who follow you.

I now have three Twitter accounts with nearly 2,000 followers:

And that’s the “secret” to growing your Twitter followers. OK, you can send me your money now.