In our hallway we have a barometer. It belonged to my grandmother, so it’s a family heirloom, although it’s not at all valuable in a monetary sense. But it does hold sentimental value, as it transports me back to my grandmother’s hallway, and it has a lot of educational value for our family.

Our children love, love, love this barometer! Every day they look at it and report to me what the weather is doing.

I find that our barometer is roughly as accurate as the official weather forecast for predicting the weather for the day ahead. But you need to know how to interpret it.

Most of the time it points at “rain” – this is Britain, after all. But this doesn’t necessarily mean rain. It usually just means, “meh”. That’s how the weather is, most days. Just, meh. 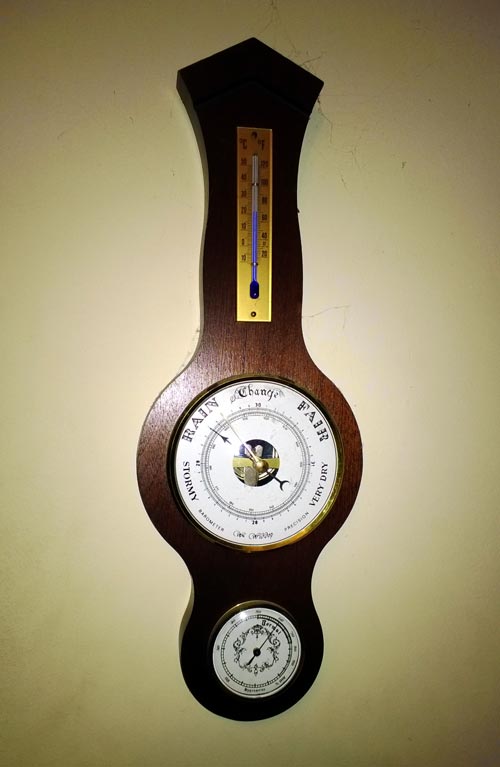 Very occasionally it moves up to “change” – this means that the sun is probably going to shine. This doesn’t happen a lot, and probably the weather will change back to “meh” pretty soon, so make the most of it!

Once I saw the barometer point to “fair” – this was on the hottest day of the summer.

I have never, ever, seen it point to “very dry” – what do you think this is, a desert?

Today, the barometer is causing a great deal of interest in the house, because it has moved not just to “stormy” but beyond, to the part of the scale that cannot be named for fear of spreading public panic, but could probably be labelled “the end is nigh”.

This looks bad. But don’t worry, it might not spell disaster. It might just mean “stay indoors and put a cardigan on” – this is Britain, as I keep reminding you, and we just don’t have hurricanes or earthquakes or pestilence here. At least, not very often. But very occasionally, disaster does strike. Two years ago, when the barometer pointed beyond “stormy”, this happened:

So, we are watching and waiting, and hoping that no trees will blow down. The official weather forecast predicts nothing worse than “chance of rain”, so we’re hoping that our doom-mongering barometer is just exaggerating.

But you never know. These might just be my last words.

This entry was posted in Life. Bookmark the permalink.