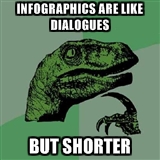 Non-Believer: I have no idea what you mean. Infographics are nothing like dialogues.

Believer: Do you even know what a dialogue is?

Believer: Sure, but do you know what dialogues are for?

Believer: But that’s kind of the point of philosophical dialogues. They’re a device for putting forward one point of view, while seeming to embrace two opposing ways of thinking.

Non-Believer: So, you’re saying I’m just a dumb asshole who’s here to prove a point, while you lecture me and poke holes in my belief system?

Believer: Precisely. Dialogues were commonly used by Plato in his Socratic dialogues. In these, Socrates interrogates another thinker, challenging his views, uncovering his prejudices and ultimately leading him to admit that he was wrong all along.

Non-Believer: They are so not.

Believer: In a contemporary infographic, there are two elements – an arresting image juxtaposed with a pithy slogan. They are a modern form of propaganda.

Non-Believer: Possibly. But they are also an ideal form of mass communication for the internet age.

Believer: Which is what makes them so dangerous. They’re exactly what I was telling you about when I discussed the dangers of the meme.

Non-Believer: You’re so wrong. According to studies, infographics have been shown to improve cognition by utilizing graphics to enhance the human visual system’s ability to see patterns and trends.

Believer: That might be true of infographics that display complex data in a simple form that can be easily grasped. People like Professor Hans Rosling are masters of this form of information presentation, showing complex trends, like how the world is becoming less divided due to technology and globalization.

Believer: But what if the image is of a cute dog or a grumpy cat, and the caption has nothing to do with the image and is entirely unsupported by facts?

Non-Believer: That would be bad. But how is that related to a dialogue?

Believer: Don’t you see? They’re both just rhetorical devices for putting across a particular point of view.

Non-Believer: I don’t see it. In the case of a dialogue, two opposing points of view are presented impartially, and one is demonstrated to be true while the other is false. In an infographic, only one view is presented.

Believer: That assumes that a dialogue really involves two people and wasn’t simply written by one person pretending to be two.

Non-Believer: You’re right. I agree with you entirely.

Believer: I knew you would eventually.

Non-Believer: Perhaps a picture of a dinosaur would have been a whole lot quicker.

This entry was posted in Life and tagged Belief, Creativity, Internet, Language, Philosophy. Bookmark the permalink.

19 responses to “Infographics are like philosophical dialogues, but shorter”